Episode 4: Reimagining traffic in Budapest together!

“The only thing you cannot do in Budapest is drive and stop”. This is a common saying among people when the city comes to a halt, or when they are hunting for parking spaces in vain. This quote also appeared in the latest episode of Budapest Restart’s talk series, this time the topic was car traffic in the capital. The guests of Gergely Karácsony were Krisztián Csősz, the founder and editor-in-chief of the Budapest Motorists’ Association, Róbert Winkler, the editor-in-chief of Totalcar and Melinda Várfi, participatory method facilitator, and founder of Impact Hub. The mediator was Szilvia Krizsó.

The mayor emphasized that you have to take steps to increase the share of public transport to 50% and cyclists to 5% by 2030, and that it will not happen by itself. According to car journalist Róbert Winkler, the middle class has simply been pushed out of the capital, and these people are now forced to commute by car. However, Mr Winkler believes one of the most damaging measures was to place tolls on the M0 motor way; which unfortunately, falls under the competence of the government not the capital. 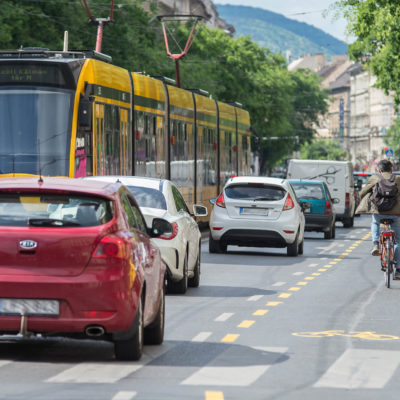 There are those who claim that the traffic improvements in the recent weeks – for example the bike lanes painted on the boulevard, the quay which opening on the weekends for pedestrians (and thus closed to car traffic), or the speed limits that are under discussion for a few weeks now – are all against motorists. Mayor Karácsony highlighted that “Budapest is a dangerous place”, and wanted to emphasize that not everything is about the motorists. There is a fatal car accident almost every week. Every year, polluted air caused another 2-3 thousand deaths, largely due to the poor heating systems, and heavy traffic. Although numerous features make Budapest unique, you can learn a lot from the success of foreign examples. Vienna’s city centre, for example, will soon be almost completely car-free. Everyone wants to live in a city that has cleaner air, which is quieter and safer. At the same time, many envision this ideal future, in which others will leave their cars at home, and they can speed across the city “like a knife through a butter”. According to Krisztián Csősz, more and more people use a company car, because “petrol is burnt in the company car for free”. Another important factor according to Mr. Csősz, is that one cannot arrive as well-dressed by bicycle or public transport as if one were getting out of a car. Gergely Karácsony, on the other hand, said that “everything can be transformed”. In Vienna, for example, seventy percent of citizens travel via public transportation with an annual pass, which a significant portion of them receive as part of their extra allowance. In Hungary, unfortunately, this is not a common practice and even due to tax legislation, yearly passes are even more expensive if a company buys it than a private individual. According to the Mayor, even a company car can be combined with public transport, or even an electric scooter if someone jumps out of the office during the day.

One of the currently discussed measures that has been misunderstood by many in recent weeks are the plans for increasing speed limits in Budapest. While in the city, everyone wants to get from one place to another quickly, but no one wants too much traffic in their own place of residence. Speeding is not only dangerous, but also extremely noisy. According to Gergely Karácsony, motorists would be better off with a new parking system. With the free parking initiative still in place, car owners did not win anything. It is a failed incentive system, with many people leaving their car in one place for up to three weeks. It would be much better if you didn’t have to pay for the first quarter of an hour, but after that parking would become more and more expensive every hour. This would encourage drivers to occupy a parking spots for shorter period of time, which speeds up rotation and allows more people to park. This, of course, requires a uniform system throughout the city, and the need for paid parking in each location should also be reviewed in some cases. It would be better for commuters to park their cars outside the city, and use public transport from there, which, of course, again only requires parking spaces. Robert Winkler drew attention to the fact that for many, traditional P + R is too inconvenient, and the transition should start much further away than where the current junctions are.

Residents of Budapest – similarly to the social consultation about the parks – will soon be able to express their opinion on what they think about the topics discussed on this episode on an interactive, online interface. It may be unusual for Hungarians, but in many major cities around the world, from Montreal to Cambridge, it is common practice to involve the community in decisions, Melinda Várfi pointed out during the conversation. It must be shown that the views of the constituents are constantly taken into account in decisions, not just during elections. That’s why Gergely Karácsony considers it important that people can have a say directly on part of the capital’s budget – up to 1 billion HUF. At the same time, residents of Budapest are constantly asked to express their opinion on everything, be it the speed limit or new bicycle lanes.

The next weekly broadcast of Budapest Restart will be about tourism, which can be followed live on the Facebook page of the City Hall, as usual on Thursday afternoon.